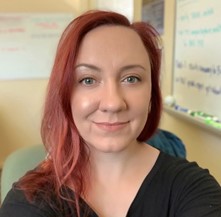 Dr. Alicia Aarnio is an astrophysicist and Assistant Professor at The University of North Carolina at Greensboro. She graduated from Smith College, a women’s college, in 2005 double majoring in astronomy and physics. She then attended Vanderbilt where she earned her Ph.D. in Physics in 2010, a year in which only 20% of Physics PhDs were conferred to women. Since beginning with a Research Experience for Undergraduates (REU) project, Dr. Aarnio has been in the field for 19 years, and when not teaching and conducting research, she loves to make, repair, and grow things. Dr. Aarnio enjoys knitting (with the yarn she spins herself!), and she is constantly tinkering with different home improvement projects such as restoring an antique spinning wheel or gardening.

Dr. Aarnio has always been interested in science and had dreamt of becoming a marine biologist until realizing she might have to learn how to swim. Fortunately, by high school her interests had shifted toward land-based pursuits: astronomy, chemistry, Spanish, and music composition/conducting. She ended up choosing a liberal arts college because all those options would be available to her, and she figured she could decide on her field later.
Dr. Aarnio credits her progress to the concerted efforts and encouragement of many folks dedicated to fostering the success of women in science. As an undergraduate at Smith, she never felt out of place as a woman in a physics class. It wasn’t until later in her academic career that she was faced with the solitude of being a woman in a male-dominated field. Those early experiences helped her build up some resilience to the isolation that followed. Dr. Aarnio has had many amazing teachers, advisors, and mentors who have supported her and made sure that she had access to many opportunities. As a faculty member today, Dr. Aarnio is honored to now be the one who can support and encourage the students working with her.

Selected Publications from the Aarnio lab and Websites: